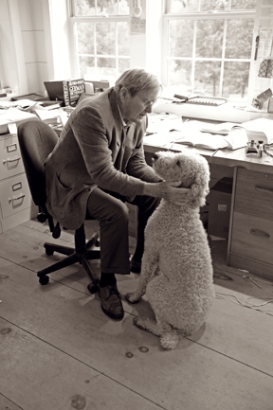 It’s Halloween, and the spirits of poets are here with all the rest.

Alas, poet Galway Kinnell has died.  Born in 1927, Kinnell was winner of both the Pulitzer Prize and the National Book award for poetry.  He was the Poet Laureate for the state of Vermont, and focused on themes of nature, social justice, and the subtle spiritual dimensions of life.  He was a man of the people who wanted to write poems that could be read and understood “without a graduate degree in literature.”

Recently I exchanged thoughts with a friend on Stanley Kunitz’ poem, “The Layers.”  We discussed how as we get older, there are so many memories and so many losses and so many people and thoughts that have gone by the wayside.  It can be sad and overwhelming at times.  Kunitz’ poem advises us to “live in the layers and not on the litter,” allowing us to appreciate our own histories in a respectful and heartfelt way.

My favorite poem of Kinnell’s also addresses this theme.  Traveling on a familiar road, we often think, “oh, here is where….”  As we get older, we think of so many things on our daily journeys, each tied to a certain space or place on the road.  So many memories.  Kinnell says “when the spaces along the road between here and there are all used up, that’s it.”

Maybe Kinnell’s spaces were all used up, his memory too full, it’s hard to say, what I can say though,  is that I’m glad he left record of his “spaces” for us.

2 thoughts on “Tribute to Poet Galway Kinnell: “The Road from Here to There””